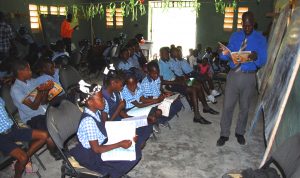 Victory International Foundation (VIF) is a community-based 501 (c)(3) organization whose purpose is to help reduce illiteracy amongst youth and adults in minority communities by providing diversified education programs customized to meet the needs of the target communities. The overarching goal of VIF is to see that minority students excel in the classrooms and in standardized tests.  VIF has been providing customized after school programs to minority students in Palm Beach and Broward counties in the U.S. State of Florida for the past five (5) years.  VIF has also sponsored school tuition and summer programs for students in Haiti in the City of Pont Sondé in Artibonite region.

With the financial support of a few close friends and personal savings, Marthe F. Phanord whose idea led to VIF’s founding, began tutoring, providing FCAT prep and literacy programs to approximately 60 students yearly in an after school setting.  The program was designed for underserved and undereducated minority students, particularly those of Haitian descent in Palm Beach and Broward counties.  VIF raised funds between 2010 and 2012 to support a school in Haiti, in the Valley of Artibonite area, providing much needed tuition support to over 100 kids.